Astronomer Witnessed a Planet System Being Born by an Unprecendent Way 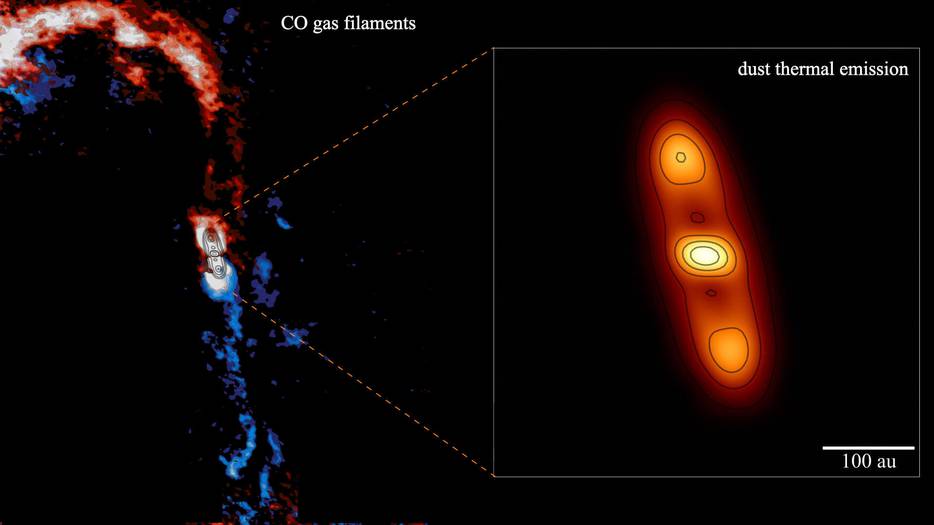 This false-colour image shows the filaments of accretion around the protostar [BHB2007] 1. The large structures are inflows of molecular gas (CO) nurturing the disk surrounding the protostar. The inset shows the dust emission from the disk, which is seen edge-on. The "holes" in the dust map represent an enormous ringed cavity seen (sideways) in the disk structure. Image © Max Planck Institute for Extraterrestrial Physics (MPE).

For the first time, astronomer saw a newly forming planetary-disk that is continuing to feed on material from its Nebula and we may need to revise our understanding of planet formation.

Over the past few years, astronomers were able to get their heads into deeper space and uplift our understanding of the universe and its extremely bizarre contents. Recently in 2020, for instance, astronomers were able to capture an evidenced of a planetary system being born. This evidence undoubtedly helped confirm our understanding of how young solar systems form and also other mysterious phenomena like how the universe, Earth, and our solar system came into existence.

Typically, planets and stars are formed inside interstellar clouds of gas and dust that collapse when there arises the imbalance between the internal pressure and gravity. The collapse will result in young stars surrounded by protoplanetary disks and planets form within these protoplanetary disks.

But here, a more recent study using Atacama Large Millimeter/submillimeter Array (ALMA) have added another level of insight into the nebular hypothesis and guide our understanding of solar system formation. Researchers have revealed an evolved protoplanetary disk still being fed by the surrounding cloud via large accretion filaments. The observation of such an event where the accretion of materials onto the protoplanetary disk is continuing for times longer than previously thought affects the evolution of the future planetary system and subsequently our understanding on the similar topics. The evidence demands the revision of the nebular hypothesis.

The team studied the accretion process in the stellar object [BHB2007] 1, also named BHB1. BHB1 lie at the tip of the Pipe Molecular Cloud (Pipe Nebula).

Astronomer using the ALMA data does not only showed the expected disk of material around the star, where planets are forming but also revealed that a disk of dust and gas around the protostar and large filaments of gas around this disk. These filaments are the accretion streamers feeding the disk with material extracted from the ambient cloud. More interestingly, the disk reprocesses the accreted material, delivering it to the protostar.

Dr Felipe Alves who led the study from the Center for Astrochemical Studies (CAS) at the Max Planck Institute for Extraterrestrial Physics (MPE) said, “We were quite surprised to observe such prominent accretion filaments falling into the disk. The accretion filament activity demonstrates that the disk is still growing while simultaneously nurturing the protostar.”

To interpret the accretion disk the team also point out that there may be other interpretations but in any case, they confirm that these filaments of gas are not out-flowing.

Paola Caselli, director at MPE and head of the CAS group said, “We present a new case of star and planet formation happening in tandem. Our observations strongly indicate that protoplanetary disks keep accreting material also after planet formation has started. This is important because the fresh material falling onto the disk will affect both the chemical composition of the future planetary system and the dynamical evolution of the whole disk.”

In addition, the team also reported the presence of an enormous cavity of a width of 70 astronomical units (AU) within the disk that encompasses a compact zone of hot molecular gas. Further, supplementary data by the Very Large Array (VLA) reports the existence of non-thermal emission in the same spot where the hot gas was detected. This two lined-up evidence suggest that a substellar object - a young giant planet or brown dwarf - is present within the cavity. As this companion accretes material from the disk, it heats up the gas and possibly powers strong ionized winds and/or jets. The team estimates that an object with a mass between 4 and 70 Jupiter masses is needed to produce the observed gap in the disk.

The authors write, “As described in this Letter, the system presents a complex morphology, with a clean and wide gap in the dust millimetre continuum, surprising for such a young object. Within the gap, there appears to be gas, and some kind of localized warm emission, also seen with the Karl G. Jansky Very Large Array (VLA). Furthermore, this system does not appear to be “finished” with accretion from the molecular cloud environment, as we see large-scale, velocity-coherent filaments in the ALMA 12CO data.”

12CO is used to trace the disk’s molecular gas and the ALMA 12CO data refers to carbon monoxide observations where the carbon is the carbon 12 isotope. Other CO isotopes are used, with each one having different properties and observations of each one revealing different gas velocities, rotations, and morphologies.

Summing up the findings they wrote, “We report the discovery of a disk with a wide gap, even though the disk itself still appears to be fed by extended filaments detected in molecular gas. As a result, this system asks the question, can planets form before the disk itself is fully formed?”

These new results mean that our old understanding, which may still apply to some solar systems, is not universal. It also brings up some other possibilities.

Research is published in the Astrophysical Journal Letters on 2020 November 19.