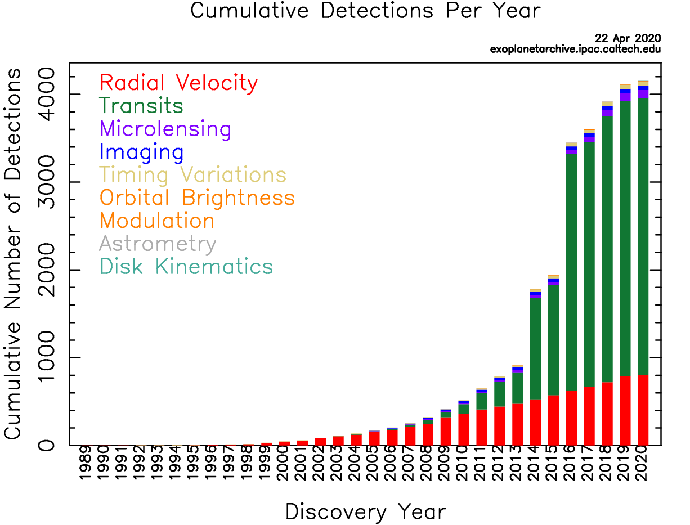 The plot of the number of planets grouped by the discovery method.

The transit method is a more promising method than the radial velocity method or Doppler spectroscopy for finding the exoplanets. Radial velocity method or Doppler spectroscopy provides information about a planet's mass and the distance from the Earth, but the transit photometric method- a method among transit methods, provides the planet's radius and its atmospheric composition.

Transit photometry method basically depends on the principle of photometry, which is concerned with measuring the flux or intensity of light radiated by astronomical objects.

When a planet orbits around a star, the light from the star to the observer is blocked by the planet, at least at some point in the planet’s orbit. The phenomenon is called the transit (cross).

A solar eclipse, for example, is a transit, that occurs as the moon passes between the sun and Earth. Though this happens for a brief period of time, the star’s light gets significantly dimmer to the observer and this tiny change is enough to provide a clue to the astronomers of the presence of the planet around the star’s orbit.

To make the change in luminosity of the star during the transit relatable and mathematical, an Earth-size planet transiting a Sun-like star causes a decrease in the apparent luminosity of about 0.001% and a Jupiter-size planet of about 1%.

Once regularly measuring the luminosity of a star and detecting the periodic decrease in luminosity, the size, and length of transit can tell us a lot about the planet that's causing the transit. The idea of studying transit is much simpler; bigger planets block more light and they create deeper light curves.

Light curves are simply the graph of brightness vs. time. that demonstrates the brightness of an object such as novae, supernovae, and variable stars over a period of time.

By using the transit method we can not only detect the presence of exoplanets but also can detect the composition of a planet's atmosphere or its temperature and this can also be done by using the information of the light curves.

Scientists can analyze the colors of the light that gets in touch with the atmosphere of the planet in order to obtain valuable clues like the composition of a planet's atmosphere or its temperature. Using this method, scientists found everything from methane to water vapor on exoplanets that are considered as the lifeline in detecting the habitable exoplanets.

Another NASA’s mission on exploring the exoplanets in the wild universe is the Transiting Exoplanet Survey Satellite (TESS) that was launched on April 18, 2018, and it already confirmed the presence of 51 new exoplanets. TESS is hoping to create a catalog of thousands of exoplanet candidates using this transit photometry method.

In addition to providing an estimation of planet diameters, and the atmospheric composition of the exoplanets, this transit photometry search can operate on a massive scale.

One of the largest exoplanets ever found, called TrES-4b, has been found by using this transit method.