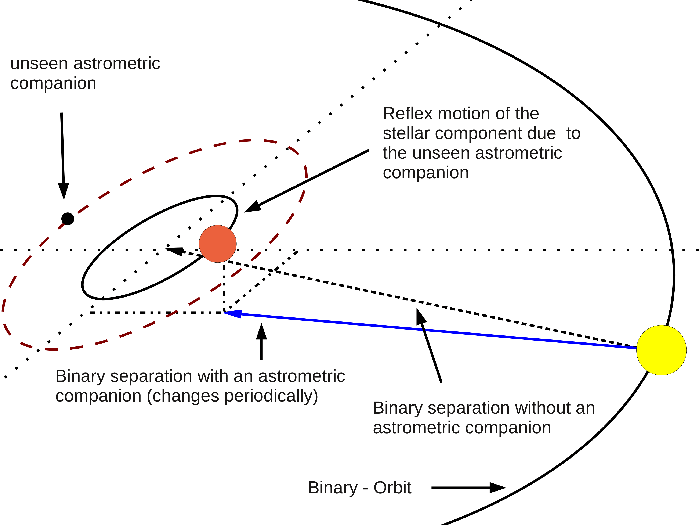 There are many methods and they are not fit-for-all types, but commonly used exoplanets detection methods are transit photometry, radial velocity, gravitational microlensing, direct imaging, and astrometry. Here, we are discussing on astrometry.

Astrometry method is used to precisely measure a star's position in the sky and observing how that position changes over time. This is preliminarily done by observing and tracking the observing the periodic wobble that a planet induces in the position of its parent star. Wobbling of the planet in a star system is selfsame the two-body problem. If a planet is in the gravitational system (pull) of another planet or the star system then the stronger gravitational pull is dominant but many don’t care that the weaker gravitational pull also imposes some effect on the object having heavier gravitational pull. This process of star and planet each orbiting around their mutual centre of mass  (barycenter) is the wobbling. Since the star is much more massive, its orbit will be much smaller and in most cases, the mutual centre of mass will lie within the radius of the larger body.

The history of astrometry date back to the age of Hipparchus who also developed the brightness scale which is still undebatable and is followed by the scientific community till today, without reservation. In history, the observations were done visually, with hand-written records but by the end of the 19th century, astrometry method used photographic plate which undoubtedly greatly improved the accuracy of the measurements as well as creates a grate data archive.

Astrometry, in fact, is itself a branch of astronomy that precise measurements of the positions and movements of stars and other celestial bodies.

The principle of astrometry is simple. Astronomers look for for a minute but regular wobble in a star's position compared to the positions of other stars. If such a periodic shift is detected, it is almost certain that the star is being orbited by an unseen companion planet. In order to track the movement of these stars, scientists take a series of images of a star and some of the other stars that are near it in the sky, by using different space-based (in some cases even the ground-based) telescopes that are fitted with well-to-do techniques and instruments. In each picture, they compare the distances between these reference stars and the star they're checking for exoplanets.

Though the technique sounds simple, this method is still amazingly hard to do: the precision required to detect such a small wobble is much high.

As of February 2020, NASA exoplanet archive listed only one exoplanet, called DENIS-P J082303.1-491201b (also known as VB 10b), as an astrometric discovery but followup radial-velocity observations of VB 10b did not detect the signal that would be expected based on the astrometric data.