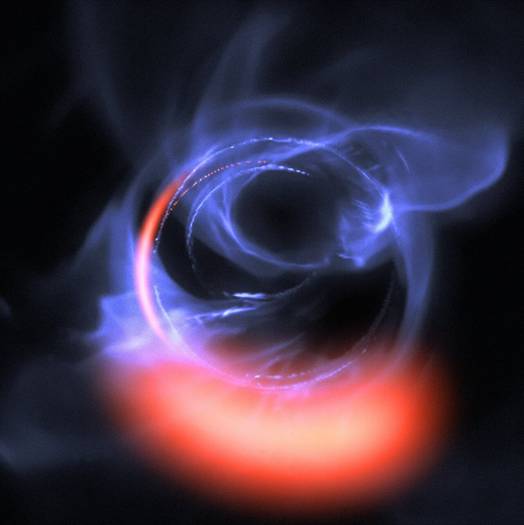 Simulation of Material Orbiting close to a Black Hole. This visualization uses data from simulations of orbital motions of gas swirling around at about 30% of the speed of light on a circular orbit around the black hole. Image © ESO/Gravity Consortium/L. Calçada

There has been a long-standing assumption among the researchers that a black hole may exist at the centre of the Milky Way galaxy and was not able to observationally verify it. But now, by tracking the motions of the most central stars for more than 16 years, astronomers were finally able to confirm and determine the mass of the supermassive black hole that lurks in the centre of the Milky Way.

Astronomers from European Southern Observatory(ESO) reported the detection of flares of the compact source SgrA* with the near-infrared GRAVITY-Very Large Telescope Interferometer (VLTI) beam-combining instrument. They reported that the flares, gas surrounding the black - hole Sgr A*, have the speed of about 30% the speed of light. Also, they claimed that the black hole, Sgr A*, has the mass four million solar masses which is equivalent to 1.3 trillion times greater than the Earth.

A research paper describing the work was published in Astronomy & Astrophysics, on October 18, 2018, and the research was undertaken by scientists from the Max Planck Institute for Extraterrestrial Physics (MPE), the Observatoire de Paris, the Université Grenoble Alpes, CNRS, the Max Planck Institute for Astronomy, the University of Cologne, the Portuguese CENTRA – Centro de Astroﬁsica e Gravitação and ESO.

Oliver Pfuhl, a scientist at the Max Planck Institute for Extraterrestrial Physics said, "It’s mind-boggling to actually witness material orbiting a massive black hole at 30% of the speed of light.” Pfuhl added, "GRAVITY’s tremendous sensitivity has allowed us to observe the accretion processes in real-time in unprecedented detail."

GRAVITY is a second-generation interferometer instrument of the Very Large Telescope Interferometer (VLTI) at  ESO’s Paranal Observatory, Chile, that combines the light of four VLT telescopes and each VLT telescope assisted by adaptive optics.

The turbulence of the Earth's atmosphere distorts the images obtained from outer space and ESO's Very Large Telescope (VLT) also can not remain intact by this inevitable phenomenon. So, to get the images without blur and see the finest details of the cosmos, astronomers used a method called adaptive optics. Adaptive optics is a well-advance and deformable mirrors that are controlled by computers. This sophisticated technique enables astronomer to correct in real-time for the distortion caused by the turbulence of the Earth's atmosphere and produce the images obtained almost as sharp as those taken in space.

Xavier Haubois, an ESO astronomer at the VLTI, explained, “By combining the light from different VLT telescopes, GRAVITY can achieve the spatial resolution of an equivalent telescope of up to 130 meters in diameter when looking in certain directions in the sky. But more than that, GRAVITY can be presented as two interferometers in one. Thanks to this stabilization, the second part of the instrument can observe the object in question with long exposure times, more than a hundred times longer than what was possible before. This is how GRAVITY can observe faint targets.”

Another main goal of the observation by the astronomers from ESO was to search for orbital motions of ‘hot spots’ of relativistic gas in the innermost accretion zone around the region where the black hole was assumed to be. These hot spots are proposed to originate from magnetic shocks or re-connection events in the innermost accretion zone leading to generate the variable IR and X-ray emission, analogous to the solar flares.

Here, GRAVITY instrument combines the four 8 m telescopes of ESO-Very Large Telescope (VLT). The light of the four telescopes is extracted into mono-mode fibres for two positions on the sky and then interfered in the beam combiner for all six baselines of the interferometer.

Astronomers placed one fibre on the bright star named IRS16C which is at about 1" North-East of SgrA*, the other on the SgrA*, and on the orbiting star S2. By this, they were able to have a precise and continuous measurement of the positional separation vector between the K-band continuum emission of SgrA* and S2.

Earlier in 2018, the team accurately measured the close fly-by of the star S2 as it passed through the extreme gravitational field near Sagittarius A*, using another instrument on the VLT; GRAVITY and SINFONI. This helped them to observe strong infrared emission and also to reveal for the first time revealed the effects predicted by Einstein’s general relativity in such an extreme environment.

Pfuhl explained, "We were closely monitoring S2, and of course we always keep an eye on Sagittarius A*. During our observations, we were lucky enough to notice three bright flares from around the black hole - it was a lucky coincidence!"

On July 22 and July 28, 2018, they mainly observed two bright flares with a peak approaching the flux of S2. They observed in the accretion disc around Sagittarius A*, the gas was moving at roughly 30% of the speed of light i.e. 0.3 times the speed of light.

The team observed three prominent bright flares from highly energetic electrons very close to the black hole and this exactly matches theoretical predictions for hot spots orbiting close to a black hole of 4 million solar masses. These flares near Sagittarius A* are thought to originate from magnetic interactions in the very hot gas orbiting very close to Sagittarius A*.