Determining the Mass of Elliptical Galaxies by Velocity Dispersion Method 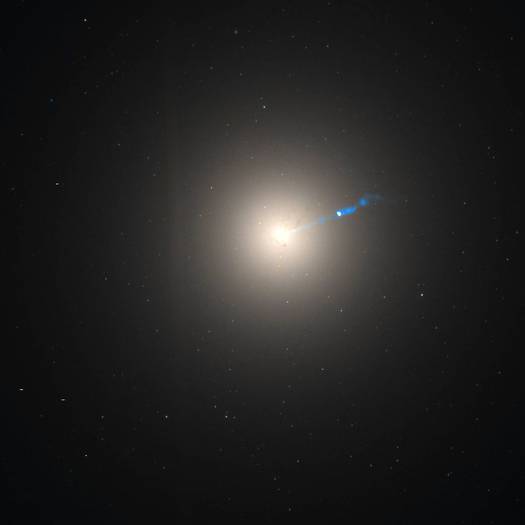 Image contains the galactic core of a galaxy - Messier 87 (M87) or NGC4486 as seen by the Hubble Space Telescope with its blue plasma jet clearly visible (composite image of observations in visible and infrared light). Image © NASA, ESA and the Hubble Heritage Team (STScI/AURA).

M87 is an elliptical (E0) galaxy - "E0" designates an elliptical galaxy that displays no flattening - that is, it appears spherical. Sometimes this galaxy is categorized as E0p - "p" indicating a peculiar galaxy that does not fit cleanly into the classification scheme; in this case, the peculiarity is the presence of the jet emerging from the core- considerably a supermassive black hole.

However, the method is quite difficult and may involve significant uncertainty, this method is widely used by astronomers in the case of elliptical galaxies.

where T is the total kinetic energy of a self-gravitating body due to the motions of its constituent parts and U is the gravitational potential energy.

Assuming the same mass of stars, this will give us a relation;

(Integration is from 0 to R)

Mis the total mass of the galaxy, R the distance of its periphery from the centre and ㄑ𝒗2 〉½ the average space velocity referred to ist centre of mass.

In simpler language, the elliptical galaxy's mass = k × (velocity dispersion)2 × (the distance the stars are from the galaxy centre)/G, where k is a factor that depends on the shape of the galaxy and the angle the galaxy is from Earth.