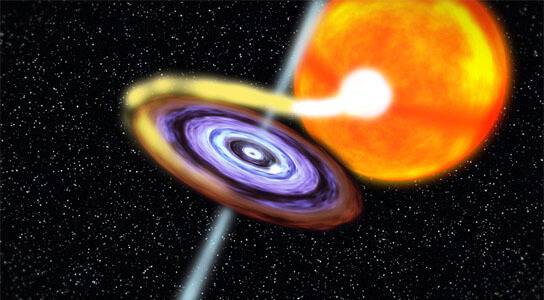 NASA’s Swift satellite detected high-energy X-rays a few degrees from the centre of our galaxy, toward the constellation Sagittarius. Produced by a rare X-ray nova, this outburst announced the presence of a previously unknown stellar-mass black hole that is located 20,000 to 30,000 light-years away. Image © NASA.

By theories concerning black holes, in addition to black holes that are formed by the process of stellar gravitational collapse, black holes also formed within the first second of the BigBang, before the existence of stellar bodies.

The black holes that are formed soon after the BigBang are the Primordial black holes.

These black holes are basically a hypothetical kind of black holes and it was first proposed by Yakov Borisovich and Igor Novikov during 1966. Later, during 1971 physicist Stephen Hawking studied about their existence and their validity and these kinds of black holes have not been visualized physically yet. It is believed that primordial black holes came into existence long before stars or galaxies (and other types of black holes) could exist and these type of black holes does not pop out by the evolution of stars.

Within the fraction of a second after BigBang, space was not completely homogenous and some areas were denser and hotter than others. Astronomers predicted that those inhomogeneous dense regions could have collapsed and evolved into black holes which we called primordial black holes. Since these kinds of black holes are not formed by the process of stellar collapse, their mass is expected to be much lesser than the stellar mass. Hawking calculated and predicted that the mass of a primordial black hole could be as little as around 10-8 kg but many predicted that their mass may vary from 10-5 grams to about 100,000 times greater than the Sun.

Why these kinds of insignificantly small Primordial Black Holes are important to us?

After LIGO collaboration announced the detection of gravitational waves from the merging of two black holes, a group of scientists proposed that the detected black holes had a primordial origin. Though this argument needs more verifications and more cogent explanation, we can fairly say that this has triggered something new for the search of primordial black holes.