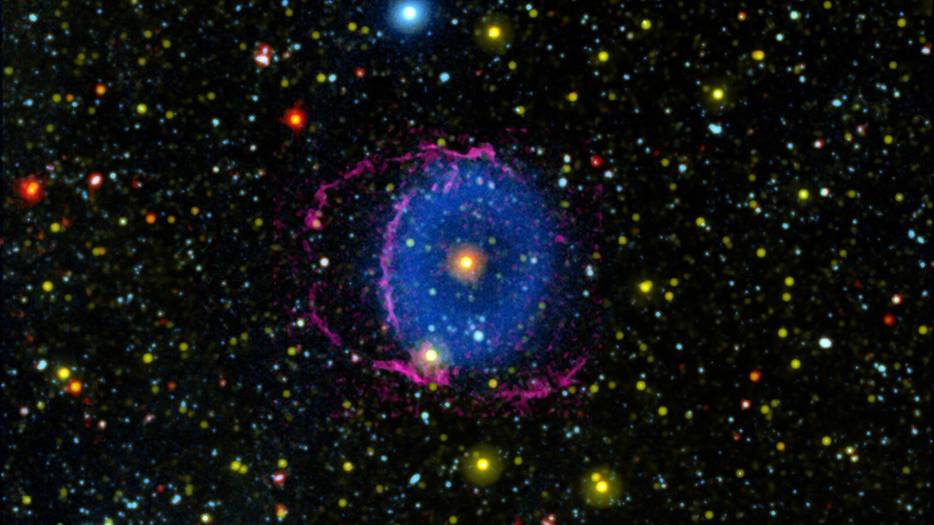 As debris from the stellar merger was blown outward, it led to the creation of a shock front, in which hydrogen atoms were excited and induced to glow with visible light, shown in pink. The shock front, and a reverse shock wave moving inward from the shock front, also caused hydrogen molecules (as opposed to atoms) to become excited and glow with ultraviolet light, indicated in blue. Image © NASA/JPL-Caltech/NASA/JPL-Caltech/M. Seibert (Carnegie Institution for Science)/K. Hoadley (Caltech)/GALEX Team.

Astronomers have uncovered new evidence on an observed unusual ultraviolet ring that was first observed sixteen years ago. The team is now offering an explanation for the formation of the blue ring around the star, named TYC 2597-735-1. TYC 2597-735-1 is the central star of the Blue Ring Nebula and the Blue Ring Nebula is located at 6,300 light-years away in the constellation Hercules.

Astronomer had recorded an unusual ultraviolet ring surrounds the star while they observed the system in 2004 using NASA's now in operation telescope- Galaxy Evolution Explorer (GALEX) space telescope. Since then, the blue colour-coded imaged largely remained as a mystery in the telescope images.

As the astronomers spent years scrutinizing the object with other telescopes, both on the ground and in space, slowly a picture of the star's hidden past began to emerge.

The team unveiled secret behind the blue ring of a nebula, named Blue Ring Nebula, by making the case where the base of a cone-shaped cloud of fluorescing debris formed after a sun-like star collided into, and engulfed, a smaller stellar companion. They were able to record the event when two cones of material were shot out in the collision, in opposite directions where one of the cones was pointed directly toward Earth and finally it appeared to GALEX as a ring.

This recorded event, in a lucid way, represents a never-before-seen hypothetical phase in the evolution of stellar merger. Scientists think that this first observed phase occurs a few thousand years into the process and is estimated to last roughly thousands to hundreds of thousands of years.

Explaining about the time frame of the event Hoadley said, "We think this object represents a late stage of these transient events when the dust finally clears and we have a good view. But we also caught the process before it was too far along; after time, the nebula will dissolve into the interstellar medium, and we would not be able to tell anything happened at all."

Keri Hoadley (the former principal investigator of GALEX), the lead author and the David and Ellen Lee Postdoctoral Scholar in Physics at Caltech said, "The merging of two stars is fairly common, but they quickly become obscured by lots of dust as the ejecta from them expands and cools in space, which means we can't see what has actually happened.”

Mark Seibert, a member of the team which first found the Blue Ring Nebula in GALEX data in 2004 said, "Every time we thought we had this thing figured out, something would tell us 'No, that's not right. That's a scary thing as a scientist. But I also love how unique this object is, and the effort that so many people put in to figure it out."

This is not the first time astronomers tried to track the shock wave of the event. Over the past sixteen years, the team used several telescopes including Caltech's Hale Telescope at Palomar Observatory and W. M. Keck Observatory, in Hawaii. The recorded shock wave also suggests that a cloud of gas had been ejected into space and buttressed the existing hypothesis.

To successfully confirm the existence of disk of dust around the stars, astronomer used the archival data from NASA's Spitzer Space Telescope and the agency's Wide-field Survey Explorer (WISE). In addition, data including from a citizen science group called the American Association of Variable Star Observers (AAVSO) also served to crack the case.

Here, in the process of collapsing of companion stars, smaller star syphoned material off the larger star, which spiralled around the small star in a disk, but ultimately the small star was consumed by its partner and the collision will launch a clod of debris out in space.

(a) (Top view.) As the primary star (mass Mp; red) evolves off the main sequence and its envelope expands (red arrows), its companion (mass Mc; yellow) is slowly dragged inwards (grey dotted trajectory). (b) (Top view.) Over the course of many orbits, the primary overflows its Roche lobe and deposits mass onto its companion. The companion, unable to hold on to this excess mass, spills it over into the common Lagrange point (L2). The companion begins to spiral into the primary. (c) (Side view.) The companion plunges into the primary. Additional mass is ejected, shaped by the circumstellar disk formed by the L2 overflow (blue). (d) (Side view.) A bipolar outflow (purple arrows), ejected at speeds of at least the escape velocity of the system, expands and adiabatically cools, quickly forming dust and molecules. The primary puffs up (red arrows) and brightens from the excess energy it received by consuming the companion. (e) (Side view.) Over the next several thousand years, TYC 2597-735-1 slowly settles back to its equilibrium state. TYC 2597-735-1 displays activity, attributed to accretion flows fed by its remnant circumstellar disk (Hα emission, radial velocity and far-ultraviolet excess emission). The ejected outflow sweeps up interstellar material, initiating a reverse shock that clears the dust and excites H2. The forward shock is seen in ultraviolet and Hα emission outlining the nebula today, whereas the reverse shock is revealed by the far-ultraviolet glow of H2 fluorescence.

A similar observation was also recorded; the collision of the two stars launched a cloud of debris that was sliced in two by the small star's disk of gas and that created the two cone-shaped clouds of debris. As the debris flew outward, it swept up gas, creating a shock wave and the ejected shock wave heated up hydrogen molecules in the debris, which caused them to fluoresce in ultraviolet light.

The discovery of an ultraviolet nebula introduces a new way of identifying otherwise-hidden late-stage stellar mergers and also provides a unique opportunity to study post-merger morphology.

The research work was published on journal Nature on 18 November 2020.