First image of a Black Hole (Part-Four); What Scientists Got? 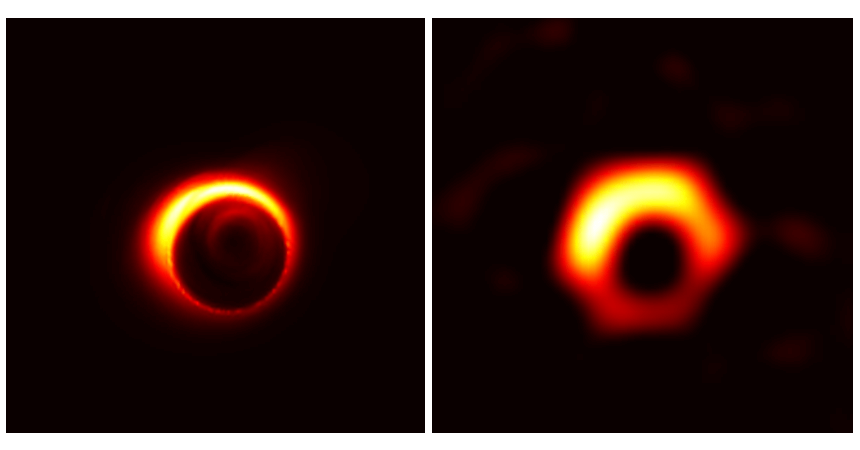 A simulated image of the supermassive black hole Sagittarius A*, which is likely to be obtained in the most recent EHT observations. The dark gap at the centre is the shadow of the black hole. Image © Kazunori Akiyama (MIT Haystack Observatory)

What was EHT checking through this project?

The main aim of this project was to image an event horizon for the first time and to help determine if Einstein’s theory of general relativity needs any revision. The EHT team successfully imaged the black hole with distinctive and clear event horizon and also claimed their study further confirmes that the general theory of relativity is right at its place, till now.

Considering the 2017 data collected by EHT, The Event Horizon Telescope (EHT) has mapped the central compact radio source of the elliptical galaxy M87 at 1.3 mm with unprecedented angular resolution. The team compared the observed visibilities with this library (created by models based on general relativistic magnetohydrodynamic simulations and synthetic images produced by general relativistic ray-tracing) and confirmed that the asymmetric ring is consistent with earlier predictions of strong gravitational lensing of synchrotron emission from a hot plasma orbiting near the black hole event horizon. Finally, they claimed that the observed image is consistent with expectations for the shadow of a spinning Kerr black hole as predicted by general relativity. They also found, as expected, the central engine for the M87 jet is powered by the electromagnetic extraction of free energy associated with black hole spin via the Blandford–Znajek process.

If the black hole spin and M87's large scale jet are aligned, then the black hole spin vector is pointed away from Earth. In this case, models in the EHT library of non-spinning black holes are inconsistent with the observations as they do not produce sufficiently powerful jets.

The team has examined the astrophysical implications of only a subset of EHT2017 data and much remains to be done, and there are significant opportunities for further constraining the models.

More results can be found here:

In the current model, EHT use M87's compact mm emission is generated by the synchrotron mechanism. The team has used a thermal model with a single free parameter that adjusts the ratio of ion to electron temperature in regions with plasma βp >1 (i.e., regions where magnetic pressure is less than gas pressure). This simple model does not span the range of possible plasma behaviour. This signifies that the ability to make physical inferences based on the models is therefore intimately tied to the quality of our understanding of the electron distribution function (eDF). More the theory of high temperature, collisionless plasmas must be better understood and so to eliminate physical uncertainty. Despite having uncertainties, the scientists are confirmed that the image shape is controlled mainly by gravitational lensing and the spacetime geometry, rather than details of the plasma physics.