If We Can't see Black Holes, How are they Detected? 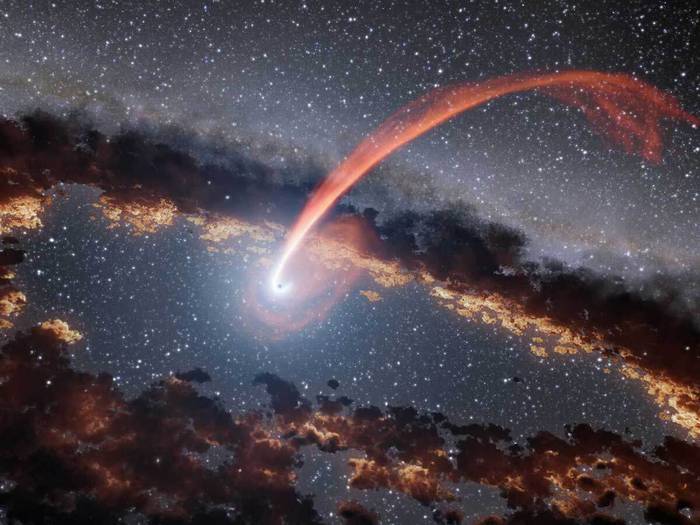 This illustration shows a glowing stream of material from a star disrupted as it was being devoured by a supermassive black hole. The black hole is surrounded by a ring of dust. When a star passes close enough to be swallowed by a black hole, the stellar material is stretched and compressed as it is pulled in, releasing an enormous amount of energy. Image © NASA/JPL-Caltech.

If light can’t escape from the gravitational grip of a black hole then how can we detect whether there is a black hole or not? Basically there are two ways of detecting a black hole in space.

Another way of detecting a black hole is by observing the matter falling into the black hole. The matters falling in a black hole settles in a disk-like structure around the black hole and due to their speed and friction that can get very hot. These hot materials emit X-rays. These X-rays can be detected from Earth. By using this technique astronomers can also predict the mass of a black hole.

Do you believe that a Black Hole has Mass, Electric Charge, and Angular Momentum?

You may not believe that a black hole has its charge, angular momentum, and mass but you have to believe this. No-hair theorem (still completely unsolved) states that all black holes can be completely characterized by only three externally observable classical parameters and they are mass, electric charge, and angular momentum. Here ‘hair’ is used as a metaphor for other information that becomes permanently inaccessible to external observers of any object beyond the region of the event horizon.

Moreover, No-hair theorem states that if two or more black holes have the same masses, electrical charges, and angular momenta then they are completely indistinguishable to an observer outside the event horizon, nevertheless if the black hole is formed from the collapsing of stars or made out of antimatter.