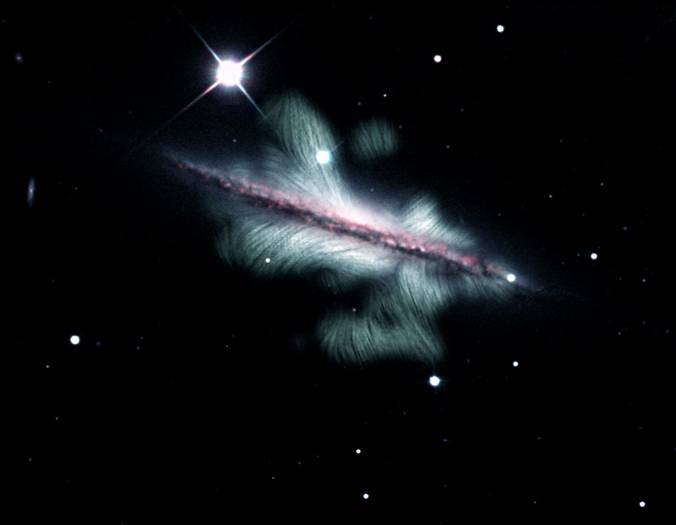 Recently, according to research from the Stratospheric Observatory for Infrared Astronomy, or SOFIA, the magnetic fields play a strong role in shaping the spiral galaxies.

Though there are other theories like gravitational theory and density wave theory that can well define the structure formation of spiral arms of spiral galaxies, here we are discussing the magnetic field theory of spiral arms.

The existence of a large-scale magnetic field around our galaxy was first discovered in the late forties and early fifties of 20 century.  From then astronomers have been continually exploring galaxies for the magnetic field. For instance, recently a team of astronomers from the National Radio Astronomy Observatory observed a large X-shaped magnetic field structure with a mean total magnetic field strength in the disk of 9 μG around a galaxy called NGC 4217. The finding was published in the journal Astronomy & Astrophysics on 21 July 2020.

Enrique Lopez-Rodriguez, a Universities Space Research Association scientist at the SOFIA Science Center at NASA’s Ames Research Center in California’s Silicon Valley says, “Magnetic fields are invisible, but they may influence the evolution of a galaxy. We have a pretty good understanding of how gravity affects galactic structures, but we’re just starting to learn the role magnetic fields play.”

Though the mechanism was never clearly understood, in the 1950's it was thought that magnetic fields could be the mysterious generators of spiral structure.

The origin of the first magnetic fields in the universe is still a topic of mystery but most community believes that protogalaxies probably were already magnetic due to field ejection from the first stars or from jets generated by the first black holes.

Protagonists of magnetic field theory of spiral arms maintain that the gravitational forces alone are not sufficient to hold the spiral arms against the various disrupting forces, particularly that arising from the differential rotation of the galaxy. According to them, the observed differences between the position of gaseous spiral and of various types of stars which condensed in these arms are due to the differences in motions of gas and stars. Since gas and not stars, is largely influenced by the galactic magnetic field, these supporters claim that the magnetic force is probably the more important agent in creating and maintaining the gaseous spiral arms. This becomes almost obvious if the field strength is high, for instance, of the order of 50 µG. But even if the field is lower than 50 µG the effect of the magnetic forces over large distances and long periods of time may predominate over that of the gravitational forces in shaping the large-scale structure of the galaxy.

The concept of magnetic field theory of spiral arms is particularly true when one considers the formation of spiral arms and their preservation over a long time score against the disrupting forces of differential rotation.

The observed regularity of gaseous spiral patterns is generally attributed to the predominant influence of the large-scale magnetic field of the gas. Such a large-scale magnetic field may also initiate and maintain a large-scale circulation pattern in the galactic gas and the spiral arms may be a manifestation of this circulation pattern. Whether such arms would be periodically generated and destroyed or they would be preserved against differential galactic rotation will be chiefly determined by the model of the magnetic field chosen and also on the strength of the field.

The mathematical relation to calculate the value of the field in the spiral arms is given by the condition;  the gravitational pressure in the spiral arm is equal to the sum of magnetic pressure and the pressure due to the random cloud motion, i.e.

Where Pk is the kinetic pressure for the random cloud motion, Pm is the magnetic pressure, and Pgr is the gravitational pressure.

Here Pgr represents the gravitational pressure both due to the stars and gas, r being the radius of the cylindrical spiral arm (assumed to be uniform), ⍴t is the total density including stars, ⍴ is the density of gas, and U is the average velocity of the turbulent gas.

However, this calculation does not include the effect of the differential rotation of the arms.

Now in 1960, a doctoral student of Subrahmanyan Chandrasekhar found that after the mass had attained an elongated spiral form, the gas on the outer side of the arm-axis will gain angular momentum and would thus move outwards, while the reverse effect will be produced gradually by differential rotation.

In the recent context, a new observation of another galaxy, M77 or NGC 1068, gave researchers definitive answers on how the magnetic line of forces (fields) of the galaxy arranged and help them in forming the iconic shape.

Astronomers using a space telescope - Stratospheric Observatory for Infrared Astronomy, or SOFIA measured magnetic fields along the spiral arms of the galaxy M77 and found that the fields as streamlines that closely follow the circling arms.

The magnetic field alignment stretches across the entire length of the massive, arms - approximately 24,000 light-years across. This implies that the gravitational forces that created the galaxy’s spiral shape are also compressing its magnetic field, supporting the density wave theory.

The result was published in the Astrophysical Journal.

Though similar to this, a high number of experimental and theoretical studies are undergoing, further observations and maybe theoretical remodelling are necessary to understand how magnetic fields influence the formation and evolution of other types of galaxies and the formation of spiral arms.

Scientists have often relied on gravity to explain their results because measuring celestial magnetic fields is extremely challenging. But the data from SOFIA now compel scientists to consider their role. There are still aspects of our galaxy’s black hole that we can’t explain with gravity alone and magnetic fields may be able to help solve these mysteries.