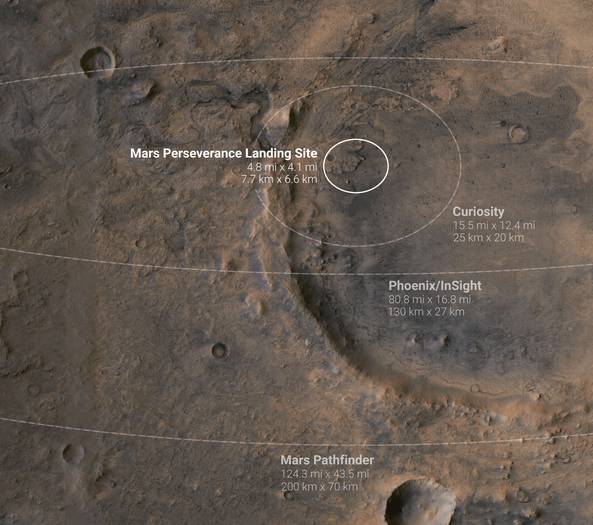 The target landing area of NASA’s Perseverance rover is overlaid on this image of its landing site on Mars, Jezero Crater. The larger landing ellipses of several other Mars missions are shown for comparison. Image © ESA/DLR/FU-Berlin/NASA/JPL-Caltech.

On July 30, 2020, NASA launched the Perseverance rover from Earth to Mars, and it lands on Mars' Jezero Crater on Feb 18, 2021. There are several ways that the mission helps pave the way for future human expeditions to Mars and demonstrates technologies that may be used in those endeavors.

To explore the Mars atmosphere, Perseverance is fitted with technologies like a method for producing oxygen from the Martian atmosphere, identifying other resources (such as subsurface water), improving landing techniques, and characterizing weather, dust, and other potential environmental conditions. Perseverance will help humans in studying Mars that could affect future astronauts living and working on Mars.

This technology is new to the Mars exploration mission. By trying out promising technologies on a smaller scale, engineers and scientists can open up new possibilities for future exploration.

MOXIE investigation on the Mars 2020 mission aims to address key knowledge gaps, including:

MOXIE is designed to collects CO2 from the Martian atmosphere, then electrochemically splits the CO2 molecules into O2 and CO.

The CO2 Acquisition and Compression (CAC) system pulls the Martian atmosphere from outside the Rover through a filter and pressurizes it to ~1 atmosphere. The pressurized CO2 gas is then regulated and fed to the Solid OXide Electrolyzer (SOXE), where it is electrochemically split at the cathode to produce pure O2 at the anode, a process equivalent to running a fuel cell in reverse.

There are O2 exhaust and CO2/CO exhaust streams, which are then analyzed to verify O2 production rate and purity and for process control. Based on conversion efficiency calculated from flow rates and composition measurements, SOXE control parameters such as CO2 input flow rate, temperature, and applied voltage are used to optimize O2 production under Mars environmental conditions.

For the electrochemical conversion to work, it requires high temperatures - about 1,470 degrees Fahrenheit (800 degrees Celsius). Providing this high temperature may also damage the other parts and functions of the rover. So, to manage those high temperatures, MOXIE features a variety of heat-tolerant materials. Special 3D-printed nickel alloy parts heat and cool the gases flowing through the instrument, while superlight insulation called aerogel holds in the heat to minimize the power needed to keep it at operating temperatures. The outside of MOXIE is coated in a thin layer of gold, which is an excellent reflector of infrared heat and keeps those blistering temperatures from radiating into other parts of Perseverance.

This is a technology demonstration to test the first powered flight on Mars and this helicopter is attached to the belly of the Perseverance rover.

The helicopter is designed to provide overhead images with approximately ten times the resolution of orbital images and would display features that may be occluded from the rover cameras.

The helicopter weighs just less than 1.8 kilograms and is built to be light and strong enough to stow away under the rover while on the way to Mars, and survive the harsh Martian environment after arriving on the surface.

Once Ingenuity is deployed on Mars' surface after Perseverance touches down, its batteries will be charged solely by the helicopter's own solar panel. It is fitted by a solar panel that charges Lithium-ion batteries, providing enough energy for one 90-second flight per Martian day (~350 Watts of average power during flight).

It is loaded with other scientific equipments like gyros, visual odometry, tilt sensors, altimeter, and hazard detectors. The  Qualcomm Snapdragon processor of the main computer of the Ingenuity is connected to two flight-control microcontroller units (MCUs) to perform the needed flight-control functions.

Depending on its performance, it will provide future mission controllers more information to help with travel routes planning and hazard avoidance, as well as identifying points of interest for the rover.