Rotation Curve Method for Determining the Mass of Spiral Galaxies 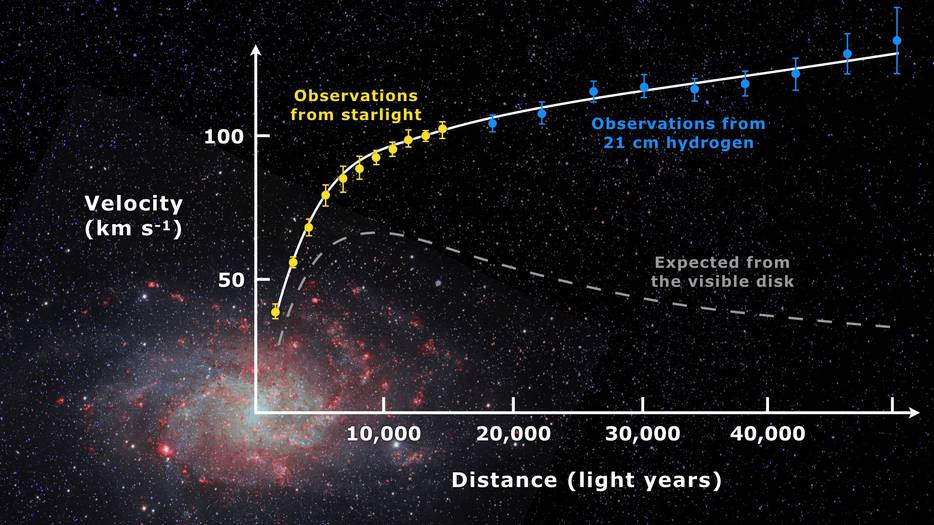 Rotation curve of spiral galaxy Messier 33 (yellow and blue points with error bars), and a predicted one from distribution of the visible matter (grey line).

The most reliable method for the determination of the mass of a spiral galaxy- rotation curve method, consists in determining the rotation curve of the galaxy and then deriving a density distribution model.

Also Read: What Process Creates and Maintains the Spiral Arms Around Spiral Galaxies?

This method best fits those spiral galaxies that are not too far from us and is bright enough to yield good spectra at several points at different radial distances from the centre.

Under this method, we need to calculate the rotational velocities which are derived from by using the principle of Doppler shift and the tilt of spectral lines originating at different radial distances from the centre of the galaxy under consideration where in most cases the observed spectral lines are usually the emission lines of H, [N II], [S II], [O I], [O II] etc. For instance, in the case of our own galaxy and the nearest spiral galaxy, M31, the rotation curves are constructed from 21-cm hydrogen line observation.

The gravitational force is equal to the centrifugal force i.e.

Where 𝒗 is the rotation velocity, G is Newton’s gravitational constant, and M the mass inside a particular radius R.

Although this method is best for spiral galaxies, it does not give the best result for galaxies at a far distance and this is mainly for two reasons. One of the reason is due to the weak 21-cm radiation from the distant galaxies and another is the uncertainties in the position measurement due to the poor resolution of the radio telescopes.

But astronomers searched for the solution; they used to record the optical emission lines for such faraway galaxies. Thus except for the nearest galaxies, the optical emission lines are used to construct rotation curves of galaxies. The rotation curve is then converted to a model of mass distribution which integrated over the entire dimension of the galaxy, yields its total mass.