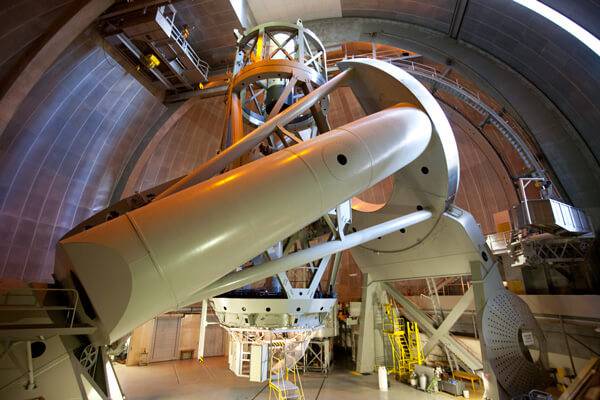 Hale telescope at Palomar observatory. Notice the "cage" under the mirror cell that houses instruments used at the telescope's Cassegrain focus. Image © Palomar/Caltech.

In an astronomical spectrograph, the photographic record of the stellar spectra is done mainly by two methods. One is slit spectroscopy and another is slitless spectroscopy.

A spectrograph doesn’t make images but instead performs spectroscopy, the science of breaking up light into its individual components. Any object that absorbs or emits light can be studied with a spectrograph to determine its characteristics such as temperature, density, chemical composition, and velocity.

This spectrograph employs a component called a slit through which the light from telescope enters and is passed to the collimator lens. In detail; light from a star is focused on a narrow slit which is in the focal plane of the telescope objective. Most of the light is then passed through a collimator lens, which renders the rays parallel. The light rays are then passed through a dispersing medium which may be either a prism or a grating. As the light passed through a prism, the light will be dispersed into different colors. The emergent spectral lines, which are non-chromatic images of the slit, are then focused by a camera lens and a curved photographic plate.

We may get some disturbance due to the jaws of the slit. Some light from the telescope objectives is intercepted and reflected back from the polished surfaces of the slit jaws. To limit this and see the distance object without disturbance, a reflecting prism is placed near the slit jaw which can send this light through a guiding eyepiece, by means of which we can observe the star-image.

The main advantages of the slit spectrograph are that the slit can be narrowed at our will. So, this method can eliminate the unwanted night skylight and the spectrum yielded can be studied in great detail. Another advantage of this spectrograph is that using this we can measure the wavelengths of the spectral lines with high precision. This is done by exposing a comparison spectrum on either side of the stellar spectrum. Generally, iron-arc is used in the ultraviolet and blue regions of the spectrum with sometimes silicon and titanium. The comparison spectra of a neon discharge tube are used in the yellow, red, and infrared regions. For low dispersion spectra of celestial sources, the comparison spectra of discharge tubes containing helium or mercury may be used.

A comparison spectrum is a line spectrum of accurately known wavelengths that is used to match and calibrate the wavelength of the unknown spectrum.

The comparison spectrum from a spark or an arc is first passed through suitable diffusers and its intensity is reduced. Then the spectrum is sent through the slit after reflection by two quartz prisms placed near the slit jaws. Now the comparison spectrum appears adjacent to the stellar spectrum and by knowing the wavelengths of lines given by the particular element used, the wavelength of the lines of the stellar lines spectrum can be ascertained by interpolation.

At last, by a comparative study of the spectral lines from the two sources, the stellar lines can be identified and the Doppler shifts of the lines in the stellar spectrum can be calculated.

Another advantage is that using this method we can also determine the radial velocity of stars.

Having prominent advantages doesn’t imply that it is limitless. Though records a fine and precise spectral line, this method can only record one star-image at a time which makes it a time consuming and lengthy process. Also, some portion of the light is also wasted by the reflection of starlight by the slit jaws.

The second type of astronomical spectrograph which is used in practice is the slitless prism which is often named as an objective prism. This technique does not employs slit nad collimator.

This technique works best in sparsely populated fields (compared to slit spectrograph), as it spreads each point source out into its spectrum, and crowded fields will be too confused to be useful. It also faces the problem that for extended sources, nearby emission lines will overlap. For this, a large prism of a small angle in front of the telescope objective is used which enables us to photograph a large number of stars simultaneously. The spectra of all stars in the field of view are spread out into narrow streaks which may be winded at will to study the fine details.

The main advantage of this technique is that quite a large number of stars with sufficient brightness can be photographed in a single exposure. Another advantage is that the objective prism spectrograph is perfect for the case of small telescopes, so that small apertures can cover the entire field of the prism. This method is particularly useful in the case of a quick survey type study.

Though this technique is mostly used in the case of studying a large number of stars to be studied within a short time, this method has some back draws. First is, this method doesn’t give us finer details of the spectral lines as the slit spectroscopy gives. The image of a star may be blurred due to bad seeing or due to improper guiding of the telescope. This limitation can be eliminated in the slit spectrograph by setting it to long exposures. Second drawback is, as this method doesn’t employ comparison spectra, so this method can’t give us a detailed study of the spectra line and the Doppler shift of the lines. Also, objective prisms of large size are quite difficult to make.

We have one more commonly used spectrograph technique called the diffraction grating spectrograph which I will be describing in next but I would like to add an example of it. Echelle SPectrograph for Rocky Exoplanets and Stable Spectroscopic Observations (ESPRESSO) installed at the incoherent combined Coudé facility of the VLT works on the principle of diffraction grating called echelle grating.