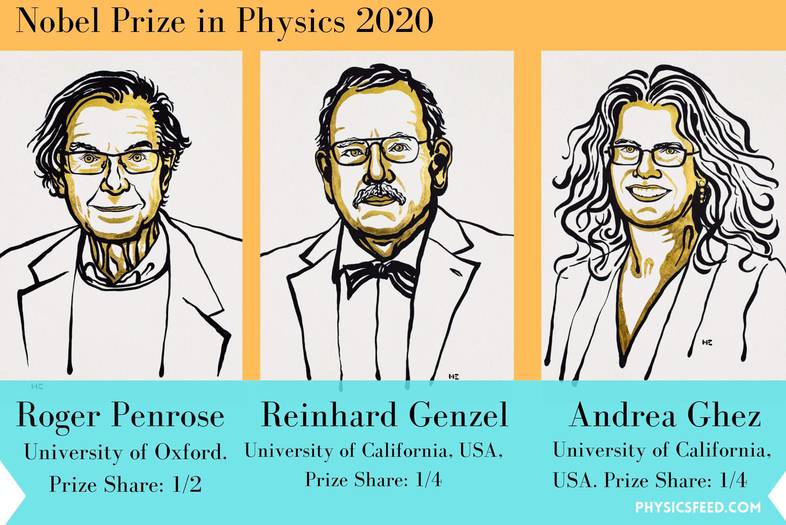 In brief, Roger Penrose was awarded the Nobel Prize in Physics, 2020, for showing a mathematical model of the general theory of relativity leading to the formation of black holes. Penrose is already awarded awards like the Albert Einstein Medal, Dirac Medal of the Institute of Physics, Wolf Prize in Physics, Dirac Medal for the Advancement of Theoretical Physics, and Eddington Medal.

The first concept of a black hole was proposed by astronomical pioneer and English clergyman John Michell in a letter published in November 1784. Michell, through his simplified calculation, assumed that a body exits whose body might have the same density as the Sun, and concluded that such a body would form when a star's diameter exceeds the Sun's by a factor of 500, and the surface escape velocity exceeds the usual speed of light. In the 1784 paper, he correctly predicted that such a supermassive, non-radiating object might be detectable through their gravitational effects on nearby visible bodies.

After Michell’s calculation, here comes the contribution of Albert Einstein’s general theory of relativity. It was finally Johannes Droste, a student of Hendrik Lorentz, who independently gave the same solution for the point mass and wrote more extensively about its properties. That solution leads to the existence of what is now called the Schwarzschild radius, where the object becomes singular, meaning that some of the terms in the Einstein equations became infinite, however, that nature of object at that time was not well understood and many researchers didn't believe the solution.

Subsequently, after the contribution from physicists and mathematicians like Arthur Eddington, Subrahmanyan Chandrasekhar, Lev Landau, Robert Oppenheimer and many others, David Finkelstein, in 1958, identified the Schwarzschild surface as an event horizon whose solution didn’t strictly contradict Oppenheimer's results, but extended them to include the point of view of infalling observers. Later other physicists and mathematicians like  Roy Kerr,  Ezra Newman, Werner Israel, and Brandon Carter. Ultimately in the late 1960s, Roger Penrose and Stephen Hawking used global techniques to prove that singularities appear generically.

With all these achievements, at first, even Albert Einstein, the father of general relativity, thought that black holes could not actually exist.

When Albert Einstein presented his theory in November 1915, it upended all the previous concepts of space and time. The theory describes how everything and everyone in the universe is held in the grip of gravitation.

Einstein’s general theory of relativity provided an entirely new foundation for understanding gravity, which shapes the universe at the largest scale. Since then, this theory has provided the basis for all studies of the universe from the what holds us on Earth, to the orbits of the planets around the Sun and the orbit of the Sun around the centre of the Milky Way and also has the practical use in one of our most common navigation tools, like GPS.

Now here comes the role of British theorist Roger Penrose. Penrose was first baffled by a curiosity; whether black holes could form under realistic conditions. Later in the 1960s, Penrose came with an idea which he called trapped surfaces, a crucial mathematical tool needed to describe a black hole.

Trapped surfaces became a central concept in the completion of Penrose’s proof of the singularity theorem.

Using trapped surfaces, Penrose was able to prove that a black hole always hides a singularity, a boundary where time and space end. Its density is infinite and, as yet, there is no theory for how to approach this strangest phenomenon in physics

Penrose demonstrated that at the heart of black holes a singularity, a boundary at which all the known laws of nature break down exists. To prove that black hole formation is a stable process, Penrose needed to expand the methods used to study the theory of relativity – tackling the theory’s problems with new mathematical concepts. Penrose’s ground-breaking article was published in January 1965 and is still regarded as the most important contribution to the general theory of relativity since Einstein.

The second half of the Nobel Prize in Physics, 2020, was awarded to Reinhard Genzel and Andrea Ghez (shared 1/4) for “for the discovery of a supermassive compact object at the centre of our galaxy”.

For more than fifty years, physicists have suspected that there may be a black hole at the centre of the Milky Way but tracking a black hole is always a challenging task as we can’t physically see the object from which even light can’t escape.

Related: If We Can't see Black Holes, How are they Detected?

Even the world’s largest and the most powerful telescope have limitations on how far it can observe. This happens due to many factors like large bubbles of air above the telescope, Earth’s atmosphere, and the dust and grains. For instance, large bubbles of air above the telescope, which are hotter or colder than their surroundings, act like lenses and refract the light on its way to the telescope’s mirror, distorting the light waves. This phenomenon is also responsible for why the stars twinkle and also why their images are blurred.

To see the unseen object in space - black holes, we have to make some reference points (typically stars as we can directly observe them) and that is what separate groups of Reinhard Genzel and Andrea Ghez did.

For almost thirty years, Reinhard Genzel and Andrea Ghez groups followed their stars in the distant stellar jumble at the centre of our galaxy. The researchers track some thirty of the brightest stars in the multitude.

For increasing the capacity of telescopes, they continue to develop and refine the technology, with more sensitive digital light sensors and better adaptive optics, so that image resolution has improved more than a thousandfold. They are now able to more precisely determine the stars’ positions, following them night by night.

They found that one star, called S2 or S-O2, completes an orbit of the centre of the Milky Way galaxy in less than 16 years and so they started to track them. We can compare this to the Sun, which takes more than 200 million years to complete one lap around the Milky Way’s centre; dinosaurs were walking the Earth when we started our current lap.

They tracked some thirty of the brightest stars based on their multitude and found that the stars move most rapidly within a radius of one light-month from the centre, inside which they perform a busy dance like that of a swarm of bees. The stars that are outside this area, on the other hand, follow their elliptical orbits in a more orderly manner giving a hint that they are revolving around a black hole.

The two teams' measurements lead them to a conclusion that the black hole at the centre of our galaxy should be equivalent to around 4 million solar masses, packed into a region the size of our solar system.

The team's hope to get a direct look at Sagittarius A*. They are confident about this because, just over a year ago, the Event Horizon Telescope astronomy network succeeded in imaging the closest surroundings of a supermassive black hole. Farthest in, in the galaxy known as Messier 87 (M87), 55 million light-years from us, is blacker than black eye surrounded by a ring of fire.

A complete scientific Background on the Nobel Prize in Physics 2020 can be found here.